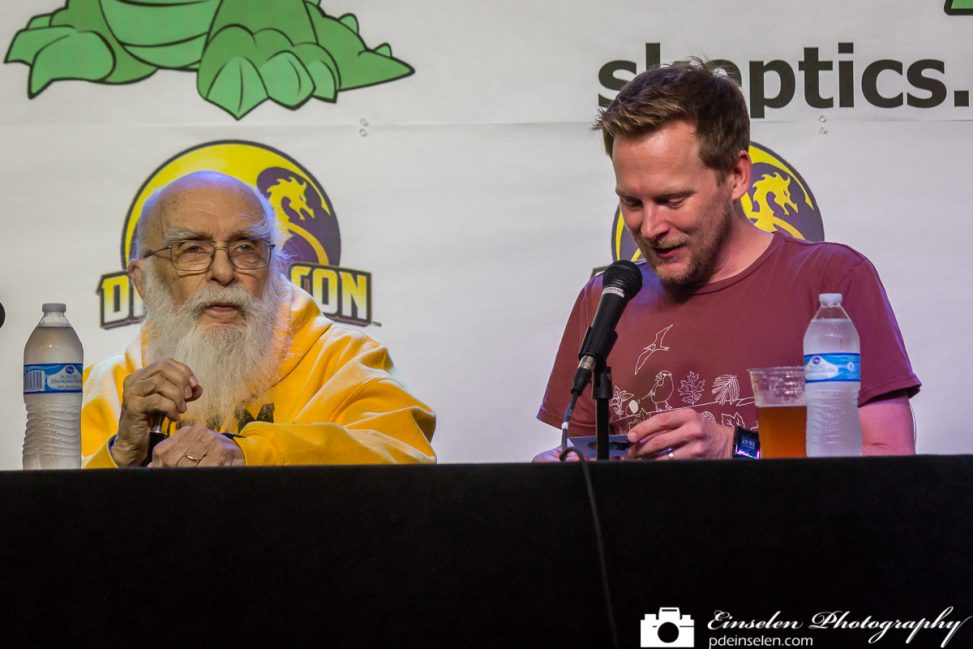 During Dragon Con Magician Brian Brushwood “Shwood” was set to appear on a panel about magic and skepticism as a part of Dragcon Con’s Skeptrack. Being a fan of Shwood I tried to attend most of his panels. Only after I had lined up over an hour prior to the start did I learn not only Shwood but also an unannounced, in the app, guest James Randi was a panelists. For those of you younger than 30-35 James Randi was a frequent guest on The Johnny Carson Show. It was quite an honor to see and hear James Randi’s stories. He told many stories of “snake oil” salesmen that fronted themselves as priest who were able to heal if the individuals would “believe strong enough.”

James Randi (born Randall James Hamilton Zwinge; August 7, 1928) is a Canadian-American retired stage magician and scientific skeptic who has extensively challenged paranormal and pseudoscientific claims. Randi is the co-founder of Committee for Skeptical Inquiry (CSI) and the founder of the James Randi Educational Foundation (JREF). He began his career as a magician under the stage name, The Amazing Randi, and later chose to devote most of his time to investigating paranormal, occult, and supernatural claims, which he collectively calls “woo-woo”. Randi retired from practicing magic aged 60, and from the JREF aged 87.[1]

Note: This post is part of a series of photos from Dragon Con. Dragon Con is a North America multigenre convention, founded in 1987, which takes place once each year in Atlanta, Georgia. For more information about Dragon Con visit http://www.dragoncon.org.