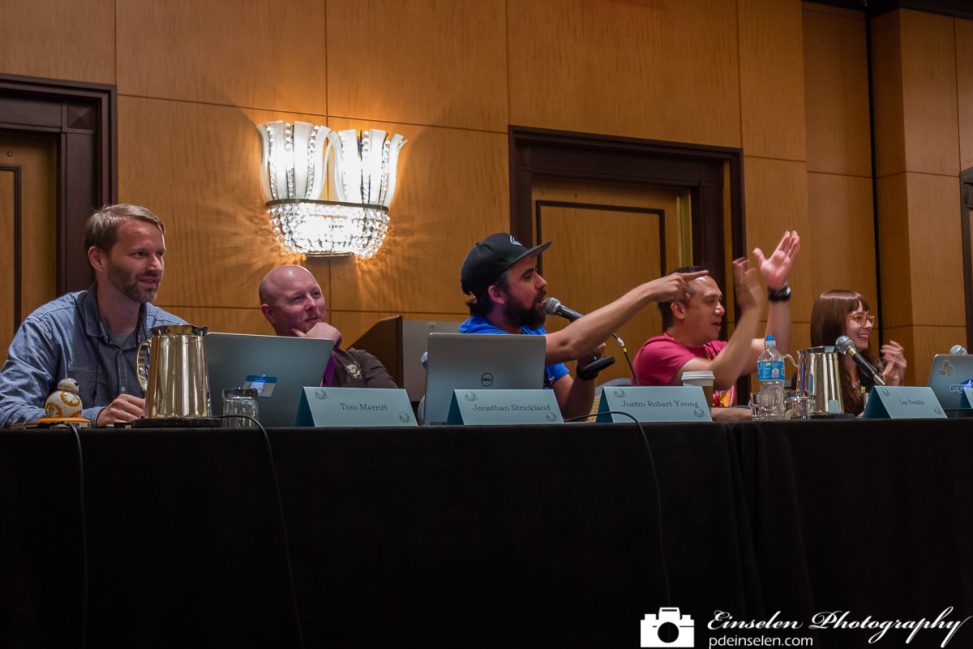 Daily Tech News Show is a daily podcast about tech hosted by Tom Merritt. Tom Merritt is a technology journalist, writer, and broadcaster. He is the former co-host of Tech News Today on the TWiT.tv Network, and was previously an Executive Editor for CNET and developer and co-host of the daily podcast Buzz Out Loud. He currently hosts Daily Tech News Show, Cordkillers, and Sword and Laser, among other shows.[1]

Jonathan Strickland has written about the future and technology professionally for six years but his interest in these subjects goes back much further. He fell in love with computers when his dad brought home an Apple IIe. He credits storytellers like Gene Roddenberry, Ray Bradbury, Isaac Asimov, Robert Heinlein and Brad Strickland for his fascination with the future and the fantastic technologies we may one day see. Jonathan’s hobbies include acting, performing improvisational comedy and playing online first person shooters (poorly).[2]

You can find Len Peralta’s quirky, offbeat style in comic books, card games, on t-shirts, posters and all over social media. Along with working on projects with companies like Discovery Channel, Warner Bros. Entertainment, Steve Jackson Games, Boom! Comics, Rifftrax and Noggin, Len has illustrated several books including “There’s A Zombie In My Treehouse” by John “Widgett” Robinson and Ken Plume, “Silly Rhymes For Belligerent Children” written by MST3K/Cinematic Titanic’s Trace Beaulieu and “Super Powered Revenge Christmas” a full graphic novel with Bill Corbett (Rifftrax). Recently, his self-published graphic novel series, Exterminite, with Mikey Neumann and Kris Straub was named as a hot property for Hollywood to adapt.

Len is the resident artist every Friday for Tom Merritt’s Daily Tech News Show where he draws an original piece while the show is being recorded. His work has appeared on CNN.com, The New Yorker and at gallery exhibitions in Chicago, Cleveland, New York, Hawaii and San Diego Comic Con. Len was also listed as one of the Top 100 Geeks To Follow on Twitter by Wired Magazine.[3]

Since 2006, Veronica has been hosting content for the web and TV. This includes everything from video podcasts to red carpet premieres. She has also been a guest on many programs as a tech, science, and futurism commentator. You may have seen her on the Doctor Who 50th Anniversary Pre-Show, the Game of Thrones Season 5 Premiere, and Gizmodo: The Gadget Testers. She has also worked for Discovery Digital, Sony Playstation, and CNET Networks. More recently she was the host of Dear Veronica for Engadget, and (as always) Sword & Laser![4]

Note: This is part of a series of photos from Dragon Con. Dragon Con is a North America multigenre convention, founded in 1987, which takes place yearly in Atlanta, Georgia. For more information about Dragon Con visit http://www.dragoncon.org/.