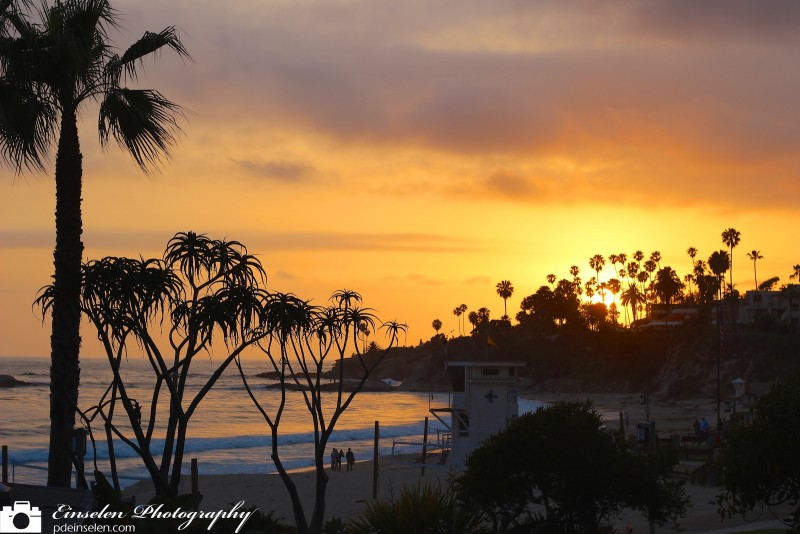 This is another shot from my travels to Southern California in the spring. After attending an all day training for business a few classmates and presenters decided to take a short trip to the beaches of California. We first parked the car and walked out to the beaches, where I was able to take a picture of the waves of Laguna Beach. We then walked around the town of Laguna Beach looking for a local restaurant to enjoy. We found a restaurant on the water in which everyone in the party found something they would like off the menu. It was a bonus that they had an upstairs balcony which overlooked the beach. Ten minutes after being seated, the sun started to set over the palm trees and hill in the background, filling the sky with bright shades of orange, red and yellow.

Laguna Beach is a seaside resort city located in southern Orange County, California, United States. It is known for its mild year-round climate, scenic beaches, coves, artist community and the dedicated greenbelt and protected bluebelt that surround this historic village. The population in the 2010 census was 22,723.

Laguna Beach was the habitation site of a prehistoric paleoindian civilization. In 1933, the first fossilized skull of a paleoindian found in California was uncovered during construction on St. Ann’s Drive. Known as “Laguna Woman”, the skull originally was radiocarbon dated to more than 17,000 BP, however, revised measurements suggest it originated during the Holocene era 11,700 years before present.Subsequent research has found several prehistoric encampment sites in the area.